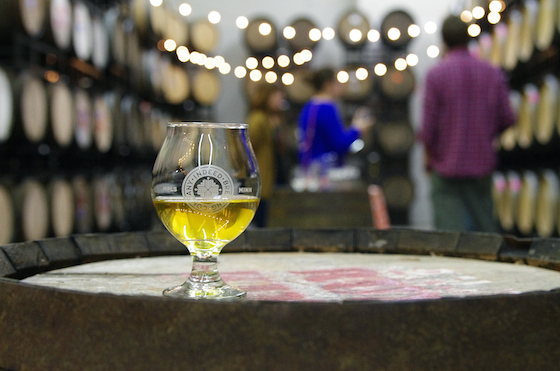 Out with the old year, in with some new brews!

Happy New Year from Indeed Brewing Company! If you’re reading this, you have survived any and all New Year’s Day hangovers and you’re recharged, ready for a new year of craft beer.

Can we just take a second and talk about what a ride this past year has been? It’s 2015, and we’re all for 'out with the old and in with the new,' but not before we take a moment to give that old year its due!

Here at Indeed Brewing Company, 2014 was a year of tremendous growth, from tangible expansion projects and increased capacity at the brewery, to coverage of new territories around our home state of Minnesota and beyond. We’ve grown from 8 employees in 2012, to 21 in 2013, to over 40 people brewing, selling, delivering, pouring, packaging and keeping you in the know about our beer.

We kick-started 2014 with the release of our much-anticipated spring seasonal Let It Ride in cans, and spent the summer growing some supersized Day Tripper which we released in tallboys to music, theater, and sports venues around the Twin Cities. Wooden Soul, our budding program of sour and wild beers, was conceived of and born, and has grown to fill a room from floor to ceiling with barrel upon barrel of unpredictably beautiful beer. We rolled out a full bill of specialty brews, and played around with infusions and Derailed varieties in our taproom. It was a very good year for Indeed beer.

We’re always proud of what we brew, but we won’t say no to some new hardware and bragging rights! We were thrilled to take home the Silver in the Specialty Honey Beer category at the Great American Beer Festival 2014 for our Mexican Honey Imperial Lager. Thanks also to The Growler for five wins in their Kind of a Big Deal Awards 2014, and to City Pages for naming us Best Brewery.

Our annual brewery parties Art-a-Whirl and Hullabaloo were bigger and better than ever, bringing local live music acts, tasty grub, and experimental, limited-release beer out to play in our parking lot. Let’s do it again, shall we?

‘Indeed We Can,’ our employee-owned give-back initiative, came into existence in June, and allows our staff to donate funds to the non-profit organizations near and dear to their hearts with the proceeds from taproom sales on Wednesday nights. Since the launch of the program, we've been able to donate over $35,000 to local charitable causes!

Whew. That’s a lot for a mere 365 days! The only thing better than reviewing a successful year is looking forward to the year to come, and there’s a lot to look forward to, indeed: Mexican Honey tallboys, releases from Wooden Soul, a new IPA, and the exciting debut of our third flagship, a Pale Lager available year-round. You’re going to want to stay tuned…

Now if you’ll excuse us, we’ve got some work to do! We’re feeling fresh and rearing to take on the new year’s adventures. You in?