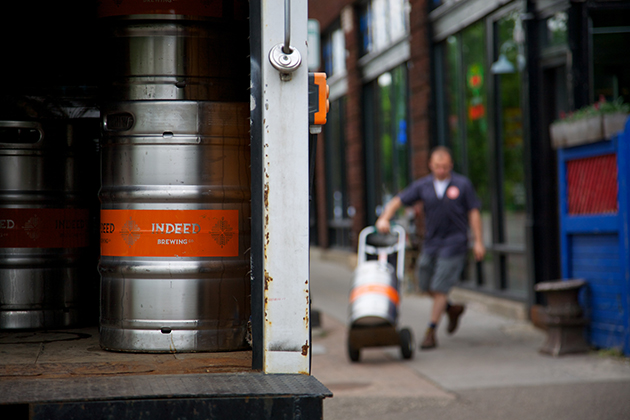 Indeed Brewing Company has partnered with beer distributer J.J. Taylor to make its beer available to craft beer fans in southern Minnesota. The new distribution deal will help Indeed Brewing Co. meet the growing demand for locally crafted beer in markets such as Rochester and throughout the region southeast of the Metro area.

Indeed Brewing will continue to self-distribute its beer throughout the Metro region. Additionally, the company is now self-distributing to the Duluth/Superior market, making the brewery’s product available in all of Minnesota’s largest markets, including the Twin Cities Metro area, St. Cloud, Rochester, Duluth and Mankato, as well as Brainerd Lakes and Bemidji.

“We’re thrilled to be working with great partners like J.J. Taylor,” said Indeed Brewing Co-Founder Nathan Berndt. “Not only are we happy to come to new markets like Rochester, but these partnerships allow us to focus on improving our own self-distribution efforts, leading to a better experience for craft beer fans all across the state.”

The latest distribution deal reflects the continued growth of Indeed Brewing. The company is on track to brew 11,000 barrels in 2014, a 100 percent increase over the previous year. The company previously announced two major expansions in production capacity in 2013.

“J.J. Taylor Minnesota is proud and excited to start our partnership with Indeed and represent their portfolio of world class beers,” said J.J. Taylor President and General Manager Mike Bamonti. “We look forward to expanding the distribution of Indeed beers in Rochester, Owatonna, Faribault, Mankato, and other areas south of the Twin Cities. Together, the teams from Indeed and J.J. Taylor will work closely and fill the many requests for these great beers.”

J.J. Taylor’s will distribute Indeed Brewing beers to the southeastern corner of the state starting on May 1.