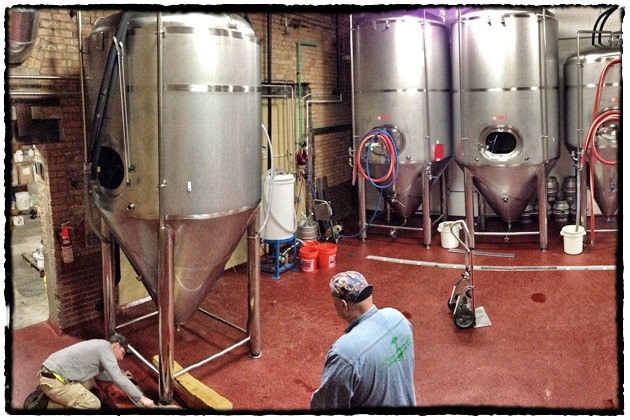 Indeed Brewing Company announces plans to double its production capacity in response to the overwhelming demand for its locally crafted beer. The expansion, a $250,000 investment, includes additional cellar tanks, production equipment, and the hiring of additional employees at its existing 13,000 square-foot facility in NE Minneapolis.

Indeed Brewing will increase its annual production capacity from 3,200 BBL’s to 6,400 BBL’s only six months after opening the doors of its highly acclaimed taproom, and beginning distribution of its beer to local bars, restaurants, and liquor stores. The largest startup craft brewery in the history of the state, Indeed Brewing has created nearly one dozen jobs, attracted more than 10,000 visitors to its taproom, and produced a lineup of beers that have been positively reviewed by consumers.

“By adding tanks on an aggressive schedule we hope to stay slightly ahead of demand which should help ensure the high quality and consistency of our beers while giving us some room to experiment with interesting ingredients and styles of beer,” said Tom Whisenand, Co-Founder.

“This is really a dream come true for all of us, it seems like just yesterday we were sitting around the kitchen table discussing our business plan and now we are doubling capacity... hopefully sleep will come after that,” said Whisenand.

Indeed beer is available on draft in its taproom, and approximately 100 bars/restaurants. Its two flagship beers Day Tripper Pale Ale and Midnight Ryder American Black Ale are available in 12-oz. can six-packs in approximately 70 retail stores found throughout the Minneapolis and St. Paul area. And with the return of it summer seasonal, Shenanigans Summer Ale, we will introduce this beer to our can line-up in 12-oz. six and twelve-packs.

“Our growth and distribution strategy has been and will continue to be one that is strong near the brewery’s vicinity, and simultaneously creating awareness to new consumers throughout the entire Twin Cities metro,” said Nathan Berndt, Co-Founder.

“This expansion will allow us to put cans of beer in more hands just in time for summer activities, which Minnesotans really take pride in...fishing on a lake, backyard BBQs, or after nice hike or bike ride,” said Berndt.

Indeed Brewing Company Brewing was founded in 2011 by friends Rachel Anderson, Nathan Berndt and Thomas Whisenand, is located in Northeast Minneapolis. Their aim is to bring more quality craft beer to Minnesota and have fun while doing it. It is this passion for beer and adventure that inspires Indeed Brewing Company to create their one-of-a-kind handcrafted brews.

As an invested member of the community, Indeed donates at least one percent of its annual sales to local and national non-profit organizations as part of One Percent for the Planet, an organization and movement that encourages corporate philanthropy for the preservation and restoration of the natural environment.