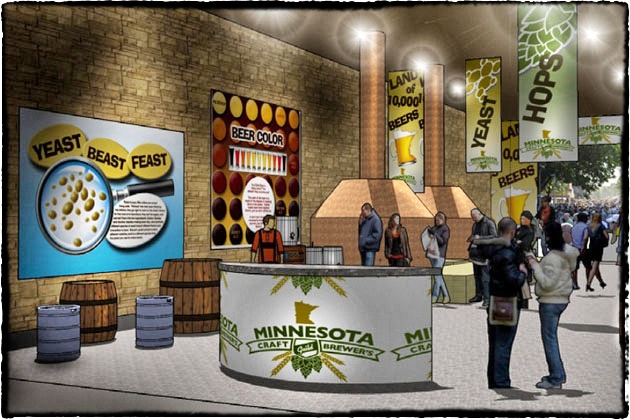 #MNBeer at the Minnesota State Fair

If you haven't been to the Minnesota State Fair yet, or you missed seeing the the "Land of 10,000 Beers"  exhibit, get on over to the Craft Beer Hall in the Agriculture/Horticulture building to sample 21 MN breweries and brew pubs, including Indeed Brewing.

The Minnesota Craft Brewer’s Guild (MNCBG) is proud to launch of the inaugural ‘Land of 10,000 Beers’ Craft Beer Hall exhibit at the Minnesota State Fair from Thursday, August 23, until Tuesday, September 3, 9am until 9pm.

Housed in the Agriculture/Horticulture building, the exhibit showcases the best of Minnesota’s craft beer industry and detail the brewing process all the way from the farm to the pint glass. It’ll tell the history of beer culture in Minnesota and highlight our state as a ‘brew-cation destination.’ There’s a root beer section for kids, a ‘brew deck’ stage for daily speakers and craft beer on tap from more than 20 Minnesota breweries.

The MNCBG, created in 2000, is now nearly 50 members strong including 35 breweries and brewpubs – growth of more than 30 percent in just 18 months. Craft beer’s sales growth in dollars was up 14 percent in the first half of 2012, and volume sales were up 12 percent, where volumes of sales of general U.S. beer were down more than 2 percent. The American craft beer revolution is both a national and statewide movement. The State Fair ‘Land of 10,000 Beers’ Craft Beer Hall celebrates this.