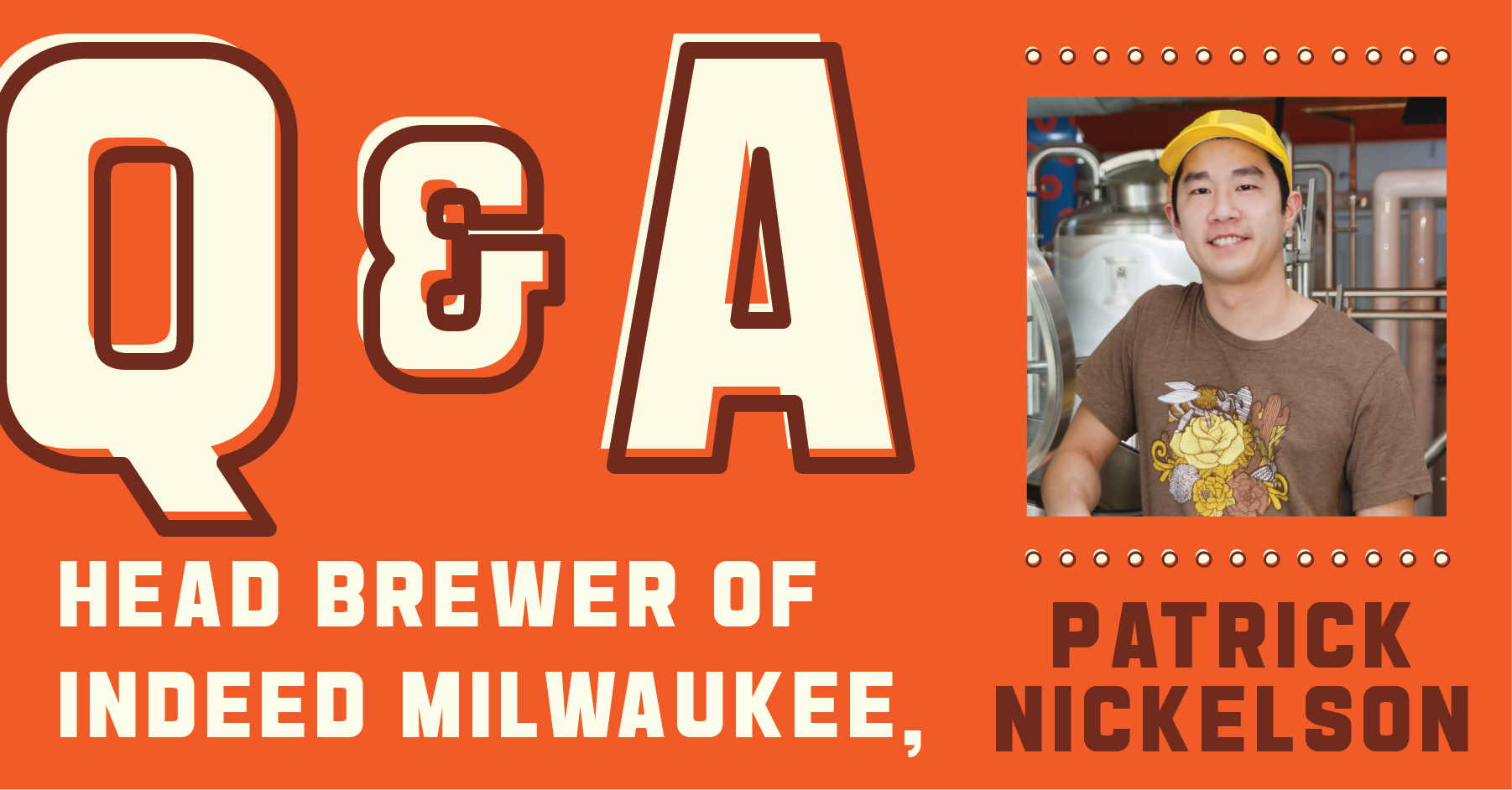 Indeed Brewing Company is approaching the one-year anniversary of opening its brewery in the Walker’s Point neighborhood of Milwaukee, which served its first beers to the public on September 6, 2019. The pilot brewery’s first year experienced both expected trials and unforeseen tribulations, coming out the other end with a new head brewer and exciting beer plans for its second year. Patrick Nickelson talks about the pilot brewery's first year and what's coming next.

What’s your background? How did you get into brewing?

I have always been more pedantic than a physical worker. I got a liberal arts degree and have been fairly academically focused throughout my life. In fact, when I first started working for Indeed, I was also tutoring students to help them prep for the ACT. So the first few months at Indeed kicked my ass. As I kept advancing my responsibilities and my body got used to the exertion, I learned that there is a different kind of gratification from rolling kegs around all day.

My dad was a carpenter for 35 years and he always talked about driving home after work and looking in the rearview mirror and seeing the work he had accomplished during the day. Brewing beer is very similar and I think unique, in that as a brewer I get to enjoy the fruits of my labor when my day is done. So while I don’t have a great answer as to how I got started, I know why I stuck with it.

When and in what capacity did you start at Indeed Minneapolis?

What was your transition like to Indeed Milwaukee and how did you help build the pilot brewery?

I was visiting Milwaukee every other week or so throughout May and June and I finally moved here in July. During that time there was still a lot of construction happening in the brewery. When the tanks started showing up, one of my co-workers from Minneapolis devised a plan for us to unload the tanks and tip them up in the building all by ourselves. I wasn’t really expecting that much involvement in the actual buildout of the space, and while I highly value the problem-solving experience, I likely won’t be doing that again any time soon. That period was full of long and hot and often upsetting days. Because I helped build the place out, and because there are only two people working in production here, I have a broader sense of responsibility and subsequent pride over the space here than the brewery in Minneapolis.

What were some cool moments of Indeed Milwaukee's first year?

We had some really cool collaborations. Hello, Milwaukee was the first beer we made here, and that was a collab between us and 1840. Now that beer has become a sort of flagship for this location. We also got to collab with Pabst, which was a very cool thing as a newcomer. And more recently, we built out a parklet in front of the building. Again, didn’t really expect to build a deck this summer, but now I get to sit on something I helped built while drinking beer that I made, and that is particularly rewarding.

Unfortunately, the head brewer for this location is no longer working with us. While I am still bummed out about that, I am now fully in charge of brewing operations here. That’s a big step up that I was not expecting at all.

We are going to start doing small canning runs for some of our brands, which is really exciting. We don’t have a canning line down here, so if we want one of our Milwaukee beers in cans, it needs to be scaled up to Minneapolis’ 30bbl brewhouse, canned there, and then distributed back down to Milwaukee. With a mobile canning operation, we can skip some steps and get a beer that people are excited about into stores immediately. And the canned beer distributed in Milwaukee will actually have been made at the Milwaukee location, which simply makes a lot more sense.

Grapefruit Paloma is your first beer recipe to be canned and distributed. What does this achievement mean to you?

I’m just thrilled that a fledgling idea I had manifested ideally. It’s like making hollandaise sauce. You know what you’re trying to make, and you can have all the ratios right, but sometimes the sauce breaks and you don’t know why. This beer was like trying to make hollandaise sauce for the first time ever and being successful. Like, wow, I can do this!

What was your inspiration for Grapefruit Paloma?

My favorite version of a paloma cocktail is mezcal instead of tequila, Squirt soda pop, and a big lime wedge. I added just a little bit of smoked malt to the mash to get some phenolic qualities that mezcal has, but not too much because smoke can be a polarizing flavor. You might not notice if you didn’t know. There is also some agave syrup that completely ferments out, but leaves behind a delicate fruity and floral quality. This beer is kettle soured, which gives the acidity a lime would add. And to add the grapefruit, we found this really amazing emulsion of water and grapefruit essential oil from the zest. It’s bright and citrusy. I would highly encourage the smashing of a lime wedge onto the lip of this can.

You’ve adopted the Fass Friday from Minneapolis. What is fast what value does it bring to the taproom/local craft beer community?

As a beer drinker, I am a little bit spoiled in that the freshest beer, which is typically the best beer, is always at my fingertips, whether it’s from today’s canning run or pouring beer from the tank to my glass. One part of the fass program is opening up that accessibility to everyone. The beer is pulled directly from the fermentation vessel, so it’s a little under carbonated, a little murky from the yeast in suspension, and a little more “raw” than a finished beer. Think of a natural unfiltered wine versus cleaner, standard versions of wine. And that freshness is ephemeral. Because the fass is oxygen vented, you really only have a few hours to capture that perfect sip.

You've started a fledgling infusion program, too. What's your mission with it?

The infusion program was born from a cask program we had going in Minneapolis. Finished beer can be rested on whatever we decide might taste good. It can give new life to an already existing beer. It’s fun to play around with flavors and their ratios, and the results are immediate and a little bit more predictable because we’re working with one or two kegs at a time instead of a whole batch of beer.

I tend to stray towards the more traditional methods of brewing. Nothing I love more than a crystal-clear German lager bubbling away in a tall glass. With the infusion program, we are encouraged to marry beer with non-beer flavors. Some will taste like your favorite candy bar, or cocktail, or anything else that isn’t beer. While adhering to tradition is important to me, it is also fun to present drinkers with beers that don’t taste like beer at all. So overall, the infusion program is our low-risk, high-reward chance to embrace the avant-garde and raise some eyebrows.

How does Minneapolis influence Milwaukee? How do you set it apart?

Personally, I have learned everything I know about brewing while working for Indeed because it’s the only brewery I have ever worked for. That means that the work ethic, dedication to quality, and even company culture trickle down to the Milwaukee location.

We are set apart because down here we get to do pretty much whatever we want. In Minneapolis, there are core brands that constantly need to be in tanks. You’re making the same beers over and over again. Here, we can experiment with different techniques, hops, yeast, and styles of beer more frequently.

What beer are you making to celebrate the brewery's one-year anniversary?

We’re making four different infusions of Hello, Milwaukee. One is infused with fresh lime zest and lime juice; it’s like a premium Bud Light Lime. Another, I will rest the keg on a pound of fresh coffee beans. Another will be infused with fresh blueberries, blackberries, and raspberries, which should lend a nice purple hue to the beer. Finally, we are making a Spaghett version with bitters and lemon juice. This one will be slightly pink.