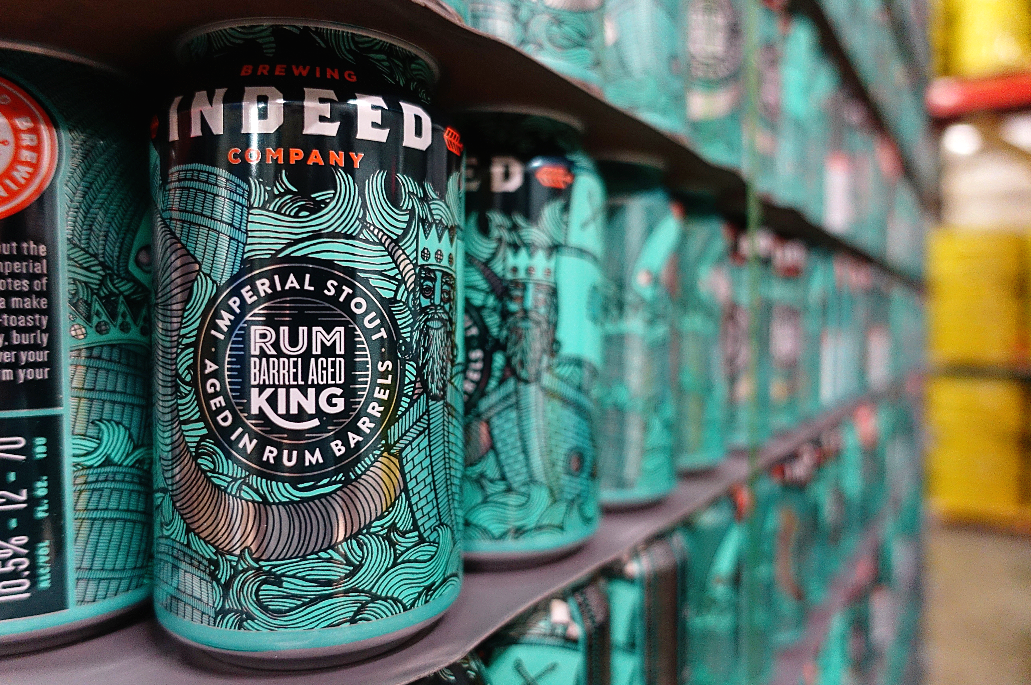 Rum King is Coming – In a Can!

Make way for Rum King! This year our imperial stout is coming to you fresh in 12oz cans fit for every swashbuckler’s life-on-the-go. They’re shipping out in 4-packs, perfect to share with your mates around a fire or save for a stormy night at sea. Featuring original artwork by Chuck U, the new cans are silver, teal, dark blue and ripe for the plundering. Below deck the goods are just the same – a pitch-black stout that’s been aged in rum barrels for just shy of one year. You’ll find the same complex notes of toffee and vanilla, with a roasty-toasty, malt-forward body burly enough to un-shiver those timbers.

To get into the nitty-gritty of everything about our imperial stout and answer your burning questions about Rum King’s break with the bottle, we sat down with our quality manager, Daniel.

Why package Rum King in cans, instead of bottles?

Both cans and bottles have their pros and cons. Cans tend to do a better job at protecting the beer from its enemies – sunlight and oxygen. The opaque nature of the can and very tight seal of the lid make it an ideal package for keeping beer fresher for a longer time. Cans are also lighter and easier to transport.

Will Rum King taste different this year, has anything changed with the recipe?

The flavor profile of Rum King changes a bit each year. While we use the same recipe, the variation in the rum barrels and aging conditions of the barrels ultimately give the beer much of its character, and these factors change year to year. The canning process won’t affect the taste of the beer.

How do you get Rum King out of barrels and into cans?

First, every barrel is tasted for off-flavors. For Rum King that usually means a sour or acetone flavor. Those barrels that don’t make the cut get dumped. The barrels that do make the cut have the beer removed and are brought to a stainless steel brite tank. Here, the beer is chilled and carbonated. Once cold and fizzy, Rum King is put into cans just like any of our other beers.

How should I serve Rum King? Can I drink it from the can?

We recommend drinking all Indeed beer out of a glass. For cans of Rum King, we suggest pouring the beer into a tulip glass before consuming so you can smell the aroma and check out the color of the beer. A serving temperature of about 45°F is what many people prefer for drinking stouts.

Can I age cans of Rum King?

Sure. While we think the beer tastes great and is ready to drink when you buy it, you can still age it in cans. There is no guarantee that aging the beer is going to improve it, but it might – only time will tell. Aging beer is really a process of oxidization – cans will slow that down, but still do the trick.

How should I store my cans of Rum King?

If you intend to age Rum King, “cellar” temperatures are best at 45-50°F. If you’re planning on drinking it soon, the refrigerator is always a good bet.

So that’s the skinny. But hey, buccaneers, we encourage you to road test it yourself. Find Rum King in limited quantities (so don’t delay) in liquor stores throughout the Twin Cities area and beyond during the second week in October. Plus, heave ho and meet us at 331 Club for the ultimate Rum King release party on October 4th – the absolute first place you’ll find this year’s Rum King on tap, along with vintages from 2015 and 2014, plus Whiskey Queen – quite a lineup. We heard Davy Jones himself might even make an appearance. So batten down the hatches and get those sealegs ready – Rum King is coming soon!